Founded in 1996 by Christine Isles and Edward Rollins after several years of working as decorative artists with a specialty in hand stenciled floors and walls, Pintura Studio was conceived from the beginning as a way of showcasing the hand cut stencil designs the two of them had produced since their partnership began in 1990.

Both Rollins, a native of Louisville Kentucky who attended Pratt Institute and Columbia University and Isles, a Canadian who grew up in Massachusetts and graduated from Parsons School of Design with a degree in fashion design began their decorative painting careers as apprentices with John Fischer and Patrick Boivin, two of the most accomplished decorative painters of the 1980's. It is with Fischer Boivin that they learned the intricate skill of cutting stencils by hand.

They applied this skill on a multitude of projects in New York, Toronto, Palm Beach, Caracas as well as Long Island, Nantucket and other locations, hand stenciling walls and floors in a myriad of styles for some of the world's most celebrated designers and their clients.

When one top designer asked them to stencil onto fabric for a project in Sao Paulo, a completely new world of home furnishings opened up to them and Pintura Studio began producing the beautiful hand stenciled fabric for pillows and linens for which they are still known today. Realizing that production would be limited with just the two of them stenciling by hand, they found the solution to this dilemma by turning their hand cut stencils into silkscreens.

By doing all of the artwork by hand, stenciling it themselves onto the acetates used for shooting screens, they were able to retain the rich, hand stenciled look for which they have become known. For some very special projects they are even able to combine hand printing and hand stenciling, resulting in fabrics which are both rich and sumptuous. Although the fabric is hand printed domestically, these beautiful silk grounds are all hand woven and hand dyed by artisans in Asia.

One thing that has remained constant in their design development has been the dedication to the hand made product. All new designs begin as a hand cut stencil, with the artwork done by hand as it is turned into a silkscreen. The silk that Pintura Studio uses is hand woven in India and works beautifully with the designs. Although the linen, cotton and acrylic outdoor fabric are woven by machine, they share the same qualities of texture.

This belief in products that are made by hand from start to finish, as well as tapping into the world's varied aesthetic is what gives Pintura Studio's fabric and wallpaper it's unique look, it's mellifluous, flowing style. 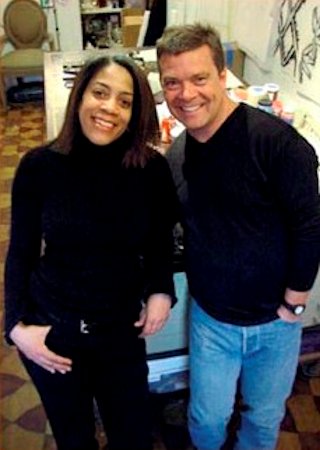